The environmentalists among you probably read the title, blurted out some explicit, and stopped reading. I am pretty sure of it. Those with an active lifestyle (who might like to bake in the sun too) probably think I am exaggerating and being a whinny child. But please, the title is nothing but a funny Doctor Strangelove reference. And if you are still reading, hear me out. I promise it will all make sense in the end.

So, where I live the weather is not exactly MS friendly. The summers are long, super hot, and very humid. Temperatures start exceeding 30C (that’s 86F) in May, peak at close to 45C (a whooping 113F) in the sun, and remain high until mid-October (sometimes later). The humidity is also extremely high (30%-80% depending on which city I’m in), exasperating the situation, and we have a dust problem making the atmosphere pretty much unbearable. (photo below actually shows what happened last September) 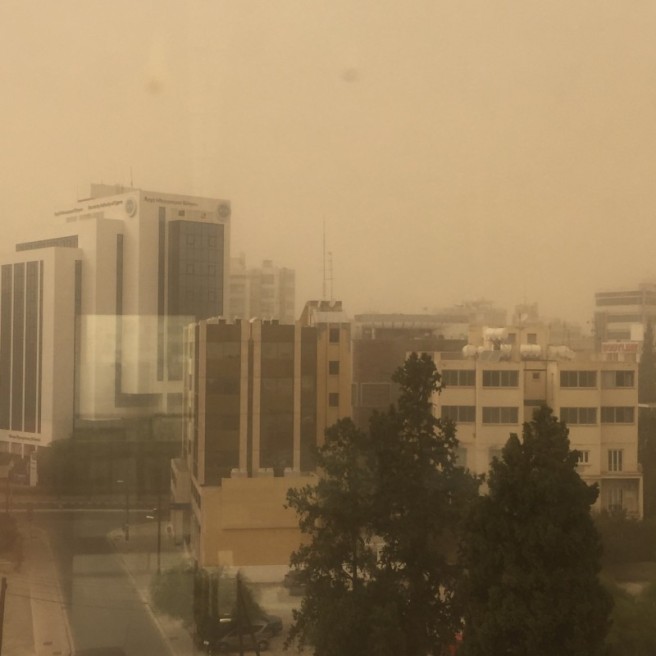 Now, these are conditions that could take a toll on anyone, not just someone with a chronic inflammatory disease like MS. But, trust me, it’s worse in our case. I can’t possibly begin to quantifiably compare how much worse, but it is worse. As in I stay indoors all day, and venture out at night only if the conditions are right – kind of like a vampire to be honest.

And this is where the cooling factor comes in. The most effective cooling method I know of is air conditioning. Yes, that air conditioning. The environmentally unfriendly, energy hogging, and (according to some studies) not that good for your health air conditioning. Fans do nothing for most of the day (despite my mother’s insistence that they do), there is little to no wind (then again the air is always hot), a hat and a hand-fan (oh I can so see me drinking mint juleps right now and talking real slow) would be as ineffective as trying to cook a turkey using the radio waves from 1,000 cell phones.

I want an active lifestyle however, so I had to figure out a way to cope with the heat outdoors if I wanted to keep doing archery during the summer. Not during July and August (treacherous months to be honest), but I did figure out a way to deal with the heat in May and June (and the beginning of July). We’ll see about September. And it is called evaporative cooling – not very good in humid environments, but in dry heat it works like a charm (most of the time). I bought myself two neck cooling bandanas, two cooling towels (in essence microfiber pieces of cloth, more like a car-wash drying cloth, that keep a lot of water and keep you cooler than your surrounding through evaporation), and six cooling sleeves that I can use both on my arms and legs, that only work for about an hour before drying out, but offer valuable UV protection. I want a cooling vest, and I have an offer to make me a pair – one that works by soaking, and a second (chunkier) that will include pockets for ice packs and will kind of work like a cooling box that you wear.

Now, these are low cost remedies, and when coupled with a fan work pretty good. However, not good enough for sustained periods of time. Air conditioning still reigns supreme. But I do care about the environment (and my pocket a bit), so I started looking into a/c alternatives. Some look very promising, and I will get around to building one of them these coming weeks (the cost isn’t at all prohibitive).

But, until I do that, I have to keep cool with my a/c, as environmentally unfriendly as it may be, and try to offset my carbon in other ways. So I will leave you with a favorite song, very appropriate given the weather, and I’ll go have that mint julep we were talking about.